On Friday 1st April I wandered casually into Robbins’ Well to ask about booking the basement gig. The guy behind the guy looked crestfallen. “I’m sorry,” he said, “that won’t be possible”. Why? “We’re closing in the next two weeks. The building has been sold.”

The news was so upsetting that I spent the next day or so trying to convince myself that it was a particularly ill-considered April Fools joke. But no, it’s true: a true Leamington Spa landmark will soon be no more. The owner of the building is selling it on, and I wouldn’t be surprised if we soon see luxury flats for Jaguar Land Rover employees appearing in its place. As well as being part of a wider national trend of pub closures, the Well is the latest victim of Leamington’s small-town brand of gentrification.

This is a tragedy.

The thing about the Well is that it’s never been a great pub. It has 3.9 stars on Google reviews, 3.8 stars on Facebook, and 3.5 stars on Tripadvisor. There are, without a doubt, better pubs in Leamington – some of them local boozers, and others somewhat more expensive places offering properly decent food. But as long as I’ve lived in the town (a good decade, now!) the Well has always been there, offering something important.

It’s affordable, without being yet another ‘Spoons. It’s a place where locals, students and out-of-town visitors mix. It’s in an excellent location – right next to the river and opposite the Parish Church, with really good public transport links. It’s in a gorgeous old Regency building with a great deal of character. It has bizarre interior decorations, with what looks like large sheets of oil barrel providing, uh, “unique” light fittings.

Most importantly for me on a personal basis, it’s a decent place for live music. 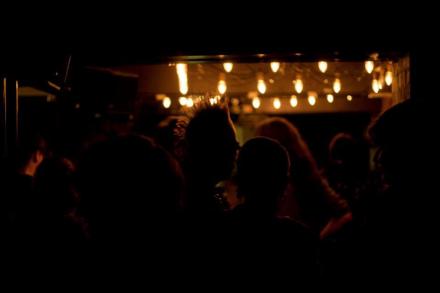 Gig in the basement of the Well (photo by Krissie Pearse)

Leamington’s live music scene has gone through its ups and downs over the years. Right now it feels like we’re going through one hell of a “down”, and a lot of that is because of the current lack of decent live music venues. The Jug & Jester hasn’t hosted gigs since it became a Wetherspoons. Kellys disappeared a few years ago, to be replaced by a short-lived and deeply sleazy strip joint that was destroyed by arson under suspicious circumstances. LAMP was amazing during its year-long tenure as a venue, but was closed by the Council without notice following a farcical dispute over noise levels (ironically, the problems for LAMP really started when they applied for planning permission…in order to install soundproofing). The Exchange was always a little questionable with all of those England flags, but at least it was somewhere you could occasionally see a punk band.

Remaining venues include the Zephyr Lounge – which is a wonderful space but costs way too much these days for DIY promoters to run small gigs with touring bands – and the Althorpe Gallery, which has hosted some great events but is tiny, appallingly inaccessible, and has basically no insulation – meaning that it’s freezing for most of the year.

The thing about the Well is that it was often not the first choice for a gig space, but there have still been many, many fantastic nights there over the years. Whilst other venues came and went, the Well was a stalwart. The venue’s staff were sometimes very accommodating, sometimes hostile, and (in recent years) most often seemingly baffled by the presence of promoters and bands, but it cost little-to-nothing to hire so it was great for charity events and we could always pay sound techs and/or travelling bands. The pub’s basement had terrible acoustics, but it was a perfect size and had a great feel for small events with an audience of maybe thirty to a hundred people. 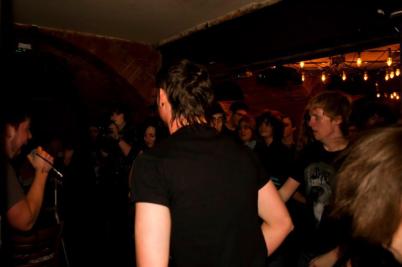 Gunmen of the Apocalypse in 2012 (photo by Krissie Pearse)

I’ve been attending gigs at the Well since 2006 or so, and running gigs there (mostly as Rolling Head Promotions) since 2007. That’s a lot of memories. Most of the bands I’ve been in have played there. Not Right played a number of key gigs in the Well basement, including our second ever performance and our album launch night. I remember attending chilled-out acoustic nights, and full-on metal nights. I remember seeing Lesbian Bed Death‘s best line-up give everything to the tiny room. I remember Satan’s Buttcheeks daubing themselves in UV body paint and playing the most ridiculous music. I remember  death metal band Mongolian Death Worm shooting deeply concerned glances to one another as a fight broke out right in front of them. I remember no-wave heroes Sissy Hex making so much glorious noise that when their set ended I felt like a great weight was being very slowly lifted from my body. I remember musical theatre: a really very impressive student performance of Hedwig & The Angry Inch, gearing up for a run at the Edinburgh Fringe.  I remember lugging equipment down the awful steps behind the venue, every time worrying just a little that we’d break something (probably a person).

Our second ever gig! (photo by Krissie Pearse)

Everyone will have their own memories of the Well. It’s not “just” a pub (so few pubs are) – it’s a place where people meet and special things happen. It’s a place with a strong history. Kirsty – who, unlike myself and Snowy, actually grew up in the local area – occasionally recounts stories of the place in its glory days as a rock pub. You had to turn up early just to find somewhere to sit – unimaginable in these quieter times. As time passed the management were less friendly towards promoters, meaning that fewer events happened there and less people found themselves feeling that the Well was somewhere you regularly went to. Eventually the walls (originally a warm, if slightly unsettling shade of red) were re-painted beige. Still, it remained a good place to go, and a decent place to hold an event. Just last year, I was fortunate enough to co-host the incredible Femmington Spa Queer Fest there; a very, very special event, with a uniquely friendly atmosphere and so many fantastic performers and workshops. In February I played another album launch gig there, this time with Abandoned Life. 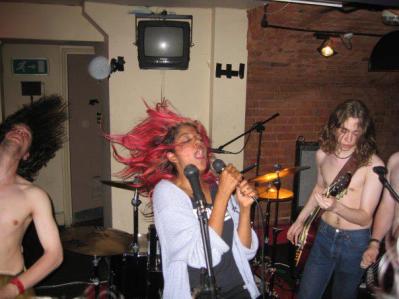 I don’t think there will be any campaigns to save the Well. It doesn’t have the deeply loyal custom of a truly independent pub or dedicated DIY venue. It’s possibly the quietest it’s been, these days, since first opening in 1998.

Still, it will be an enormous loss to Leamington. The town is on its way to becoming a true cultural wasteland. I’m not just talking about the closure of pubs and performance spaces, either. We’ve also seen the end of the Bath Place community centre – hit first by arson, and then by the sell-off of its new location in order to build (you guessed it) luxury flats. We’ve seen an enormous increase in upmarket bars that reflect not just the JLR crowd, but the growing wealth of the University of Warwick’s student population in the wake of fee and accommodation rises. The Pump Room Gardens are being redeveloped, but delightful additions such as flowerbeds around the bandstand will mean that it will be harder to see actual bands there, and will have the additional “benefit” of putting off the weird kids who currently have a habit of worrying adults by gathering together in a public space. Most worrying, rents have skyrocketed; I’m not sure how much longer it’ll be affordable to live in the town without being deeply posh.

So, I’m sad to see the Well go. I’m sorry for the current staff of the place, who were a decent bunch and have lost their jobs at short notice. I’m concerned about the future of Leamington’s music scene. I’m also worried about the future of Leamington itself; I think there are a lot of political battles to come if the town isn’t to become purely the preserve of the wealthy and boring.

But for now, we’ll remember.

23 Comments to “In Memoriam: Robbins’ Well”