With the General Election just weeks away, please share this video and vote in the election.

Voting won’t overthrow the neo-liberal establishment, but it is a fantastic Tory-removing mechanism.

The awesome Seth Corbin put together this fantastic little video from Revolt a couple of weeks back, with footage filmed by himself and members of Dirty. It features music and spoken word from a number of acts who were performing that night – including our songs “Balls” and “Tory Scum”.

I’ve never been to a Pride event quite like the one in Nottingham.

I’m used to large inner-city affairs bounded by concrete, in which ordinary revellers festooned in rainbow clothing rub shoulders with extravagant drag acts, corporate floats, angry activist types, and a whole host of questionable human adverts employed by the big clubs. Vibrant street discos in which almost exclusively male DJs pump out the dance music that’s become synonymous with the scene, lesbian singer-songwriters singing quietly from small tent in a car park, community organisers and charities getting a word in edgeways whenever they can, and that same guy in the flat cap selling whistles on every corner.

Nottinghamshire Pride was something else entirely. Placed slap-bang in the middle of a massive field, it was more akin to a (largely) family-friendly music festival, albeit one that happened to be really gay. There were many different tents, every kind of act you might imagine, and barely any of the corporate nonsense I’ve come to associate with Pride.

I normally object stridently to the idea of paying for Pride, but at £1 per head the entry cost struck me as entirely reasonable for all. And with an estimated 20,000 visitors, it’s a pretty good way to raise large amounts of money whilst minimising the need for dodgy sponsorship deals.

It was the most chilled-out, friendly and diverse Pride event I’ve ever had the pleasure of attending.

View from the Trans Tent.

We spent most of the day at the Trans Tent, so the content of my review reflects this. The very idea of a Trans Tent was pretty exciting given how marginalised trans people tend to be within the wider LGBTQetc community. Recreation Nottingham – a local support and social group – successfully won both the tent and a pot of money for performers after approaching the Pride organising committee, and proceeded to book a wide range of acts featuring both trans people and allies.

Things didn’t quite run according to plan on the day due to various delays, technical hitches and the like, but the Trans Tent was ultimately a triumph. Every performer was brilliant in their own way, and impromptu stage manager Jennifer of Single Bass did a great job of keeping everything running.

And so without further ado, and in (broadly) chronological order, a review of the acts I managed to see…

Solo singer-songwriter Single Bass performed a number of short sets throughout the day. Her songs were accompanied by fluid, evocative basslines rather than the typical acoustic strumming you might expect from such an act. The material was gentle but fun, soft yet strident.

El Dia performed feminist poetry and hip-hop that explored her identity as a queer woman of colour. Her powerful, punchy words tackled the complexity of femme power, gender politics and race in a world full of both oppression and potential.

Elaine O’ Neillwas on form, delivering a typically warm and witty series of poems that examined the intricately silly ways in which trans people (and the process of transition) are understood by the wider world. As always, her puntastic take on the relationship between doctors, surgeries, surgeons and hospitals was a particular delight.

Lashings of Ginger Beer Time are always a lot of fun, and their three sets during the afternoon were no exception. Highlights included the cabaret act’s tuneful skewering of of Gok Wan, and the sight of Margaret Thatcher performing the Evil Charleston. Unfortunately the orientation of the stage and less-than-intimate environs of an open tent meant that the group’s performance had considerably less emotional impact than I’ve experienced on previous occasions. Nevertheless, they rose impressively to the challenge.

Dieselpunk singer-songwriter Dr Carmilla forsook her normal electric instrumentation for a compelling set of originals and covers on a very shiny ukulele. The dark, evocative tone of her tunes translated surprisingly well to the bright sound of her instrument. Notable moments of genius included a re-imagining of Radiohead’s Creep (“Because I’m a crip…”) and a thoroughly original Rickroll. 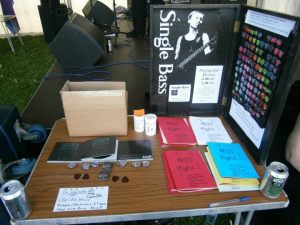 Our own performance was meant to take place near the start of the afternoon (following Elaine’s poetry) but for various reasons we had to rapidly re-arrange everything, and ended up playing two sets.

The first took place around mid-afternoon. We rapidly set up the stage, performed the world’s fastest line check, prevaricated a little over whether or not to swear in front of a potential all-ages audience during our cover of Repeat, and then blasted out a wave of messy noise.

It went pretty well, with an additional benefit of the increased noise drawing in a larger audience. Some got into it; others others seemed to stare in a state of mild confusion. We couldn’t have asked for much more!

We originally assumed that we’d be taking to the stage again shortly afterwards and effectively play the second half of our set. However, it turned out that a whole bunch of acts had to leave early, so we agreed to stick around for the rest of the afternoon and effectively provide the stage’s closing performance.

Sadly we missed a few acts whilst grabbing a much-needed bite to eat: amongst them was the Sensational Sally Outen, who has always made me laugh hysterically whenever I’ve had the pleasure of seeing her live. I could hear her inhuman  dinosaur shrieks emerge from the tent in the distance as I queued for jerk chicken.

We returned in time for an astonishingly powerful poetry reading from Roz Kaveney. She opened with an epic account of the Stonewall Riots, reflecting upon the motivations and actions of those who were there and those who might have been there; expounding upon the context of lives both known and unknown in a more difficult, more brutal world. Roz then read a couple of poems about her cunt (and to think we had a brief moment of concern about swearing…). She explored the feeling of feeling, the very experience of living through radical surgeries before growing into your remoulded skin.

A later, second set from Roz was more relaxed, more comedic, as she performed a number of delightfully dirty poems about sex as seen largely through the prism of age. I was familar with much of the material, having previously read many poems on Roz’s LiveJournal, but it was a delight to see it performed live.

George Hadden played a good acoustic set, tales told with feeling. His music was great for a sunny afternoon, and a relief of sorts from the heavy material on offer from some of the other acts!

Fellow punk band Trioxin Cherry also took to the stage in acoustic format as a stripped-back two-piece. Their material was a lot of fun, and certainly a lot more polished than our own! Of note was their cover of a song by The Creepshow, a band favoured by Snowy.

The final performer prior to our second set was Jessie Holder of queer feminist opera group Better Strangers. Now, opera really isn’t my thing, but I’ll readily admit that this was a very special performance. Singing to a backing track, Jessie explored the inherently queer complexities of classic roles, bringing an appropriately different performance to Pride.

We then dived back on stage for our second set. We decided to treat it as an entirely separate performance, writing a new setlist and bringing back a couple of songs we’d played earlier that day.

We were more relaxed than earlier and I think we benefited from this, with our playing more cohesive and direct. Particular highlights for me included a well-received performance of new song This Revolution, the collection of stereotypically lesbionic ladies who turned up to dance during our cover of Rebel Girl, and the amused reaction of the police officers who wandered over during Tory Scum.

There was also this gem of a comment from a friend:

‘Lady at Nottinghamshire Pride walking away with her 6/7 year old son: “So what have we learnt today darling? Tories are scum.”‘

As we packed away our equipment we got a taste of the variety elsewhere on the festival site, as furious folk-punk fiddling erupted from the nearby (and somewhat inaccurately named) Acoustic Stage. The culprits were the incredible Seamus O’Blivion, who I wish I’d had the time (and energy!) to see properly. I’ll certainly be looking into their music.

Apparently our set was filmed, so we’ll see about linking to that when it appears online! In the meanwhile, we’ll soon be announcing details of Revolt, a riot grrrl night we’re playing in Coventry come October.

We couldn’t have done it on our own, so I’d like to thank Leamington Jess (for transport), Dan and Freja of We Are A Communist (for loan of equipment), Nottingham Jess (for dealing patiently with a deluge of organisational emails) and Kat (for booking us following a chance meeting on the train to Manchester).

Thursday’s gig has me looking in the rear view mirror. It was organised by the same people who offered us our debut performance just before Christmas, who were working in a similar capacity.

It’s also roughly a year since I unexpectedly bumped into Kirsty at a rock night in Coventry and she told me to start playing the drums for hers and Ruth’s band.

We’ve come a long way since both of those evenings. Here’s to a similarly long way yet.

I can’t believe it’s been around a year! We’ve come a long way in that time. For one thing, Snowy and I basically had no experience playing our respective instruments! The great thing about punk is that it can give anyone a gateway into music.

The crowd seemed a little bewildered on Thursday but I suppose that’s what comes of playing a postgraduate student event. I saw a few people getting into it though, loosening up, dancing a little, chanting along to “Tory Scum”. That’s what we like to see! Plus we got some great feedback afterwards.

Our next performance will be at the B/ull(s)hit Conference (University of Warwick library, Friday 4th May): a complete mockery of the academic world in which we’re embedded. Then we’ll be playing a “proper gig” at the Exchange in Leamington on 11th May before heading to London at the end of the month.